Frank graduated from Greenville Presbyterian Seminary in 2009 with a Masters of Divinity. He graduated from the University of California at Berkeley with a Bachelors of Science in Engineering and Material Science in 1997. He worked in the Silicon Valley for almost 10 years as a semiconductor process engineer.  During a business trip to Shanghai, China he met his wife Melissa at the International Church.  The two of them grew up less than two hours away from each other in Northern California but met thousands of miles from home.  Together they are the parents of two children.  The Liu family resides in the Como Park neighborhood of Saint Paul.

Frank served as Pastor of Mission OPC, St. Paul, MN from 2013-2017. Before that he interned at Harvest OPC, San Marcos, CA from 2009-2010, then served as a Ruling Elder from 2011-2013. He also served as an intern at Bayview OPC, Chula Vista, CA during the summer of 2008. He has served as a volunteer chaplain for the Saint Paul Police Department since 2015 and is a member of the Executive Council of Pastors at the University of Northwestern – Saint Paul. 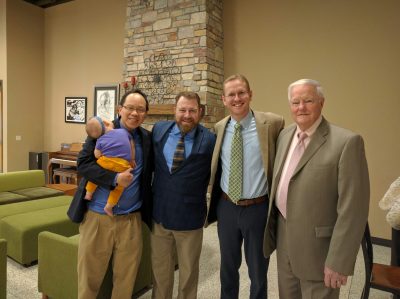 Wayne was wed to Audrey in the 1960s. They have 2 married children and 4 grandchildren and are expecting a great-grand daughter in June of 2019. Wayne worked in the automotive industry in Baldwin, Wisconsin  and then in  Minnesota.  He and his wife, Audrey, live in Stillwater.  Wayne is thankful for having God fearing grandparents and parents. He was raised in the CRC denomination where he served as deacon and elder. Wayne is grateful for his up bringing and being able to serve in Christ’s churches during his lifetime.

Jim has been married to his wife Tina for over 44 years.  They have two daughters and 4 grandchildren. They became members of Grace Bible Presbyterian Church in 1987 and he was ordained as an Elder in 1989. He currently teachers a Sunday school class called the “Keenagers” which consists mostly of senior citizens. The Roughens became Bible study students and teachers with Precept Ministries out of Chattanooga TN back in 1983. Through this ministry they learned the inductive method of Bible study and were influential in starting many such studies in southwest Ohio for 15 years.

Pete has been married to Heather for over 16 years and the father of 4. Born and raised in Ohio, Pete is grateful for a Godly heritage that preceded him. Born to believing parents and grandparents, there is not a day that he can remember not knowing the Lord. He is thankful for the grace of our Lord and savior that is continually offered and rests in God’s faithfulness.  Pete works for State Farm Insurance.

Phil was born in the 1940s, in Brooklyn, New York to a Jewish Family. He is a product of the New York public school system. He grew in the Jewish religion and tradition. Living in New York he was an avid baseball fan. (Go Brooklyn Dodgers!) He has been married to his wife Donna for over 48 years.  They have two adopted sons and five grandchildren. He is a professor of religion at Northern Kentucky University and helps out at Beth Messiah, a Jewish believing church that tries to bring the lost Jews to Jesus.

Phil has a Bachelor of Arts in Political Science from the University of Pittsburgh, a retired veteran of the United States Air Force, a graduate of Western Reformed Seminary, and  is ordained both as a Minister/Rabbi in the Jewish believing movement.